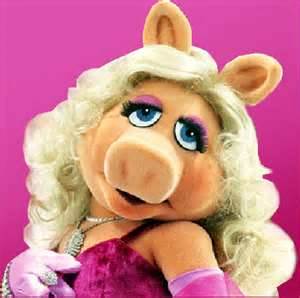 A little bit of humor is required from Miss Piggy when you read  post like the one below in the Huffington Post. Their headline was inspired by a study produced by the Open University of Israel and the Hebrew University of Jerusalem, and also published in the 2012 issue of the journal Psychological Science.  Pretty heady stuff –so it must be true right?

Au contraire my worldly, beautiful and wise girlfriends.  Let’s pause and consider how studies are constructed.  Often a sample population is queried or studied and the results are used to extrapolate conclusions about the population at large.  Some studies are non-randomized meaning that the survey population was chosen not at random, but according to more selective (or self-selective) criteria.  We don’t need the study below to know that you don’t judge any book by it’s cover and beauty perception is in the eyes of the beholder ( which is a diverse, cultural and personal experience around the world–not just 118 people in Israel! ) Here is a good page to visit and learn how studies work and why the sample size is important to the studies conclusions.  http://www.ehow.com/about_6129905_effect-sample-sizes-data-evaluation.html

Do you judge a women’s character and intelligence based on her looks?  I think every woman suffers (beautiful or not) as long as we make superficial judgements about women based on appearance.
Lauroly/WWB

There are lots of benefits to having people think you are beautiful, research suggests. According to some studies, good-looking people get hired faster, are paid more, are more likely to get loans and are given milder prison sentences. Beauty may be correlated with higher self-esteem and more satisfying interpersonal relationships. A 2009 study found that beautiful people make more positive first impressions, and a 2001 roundup of beauty studies showed that attractive people are viewed as more sociable, healthier, more emotionally stable, more romantically and sexually experienced, and more thoughtful.

But there are also possible downsides to being pretty. The latest? One recent study suggested that beautiful women are more likely to conform.

The new research, out of the Open University of Israel and the Hebrew University of Jerusalem, suggests that women who were labelled by their peers as beautiful weremore likely to conform to social norms and put their own interests before the interests of others.

Researchers asked 118 college-aged women to complete questionnaires that measured values such as self-direction, security, and conformity, and personality traits such as neuroticism, agreeableness, and openness. They then recorded a short video of each participant walking into a room and reading a weather forecast aloud.

The researchers asked a different group of 118 students, 40 percent of whom were male, to watch a random female participant’s video and rate their attractiveness, values, and traits.

The results of the study, published in the November 2012 issue of the journalPsychological Science, confirm what older research has concluded: “We found that people perceive attractive women as having socially desirable traits, such as extraversion, openness to experience, and conscientiousness,” researcher Lihi Segal-Caspi wrote.

This finding seems to contribute to the negative rap that beautiful women sometimes get. As Tony Dokoupil noted in Newsweek, attractive women in the workplace can be viewed as unintelligent or undeserving of promotions and accolades, judged as less competent, less talented, and less motherly than their average-looking peers.

The new study lends support to Hakim’s position that women can use beauty to make others view them more positively — participants judged attractive subjects as having more desirable traits.

However, the research team, led by Segal-Caspi, interpreted the findings as evidence that we should never assume “what is beautiful is good.” The results, they wrote, indicate that “the beautiful strive for conformity rather than independence and for self-promotion rather than tolerance.” Bottom line? Keep looking past those beautiful faces.