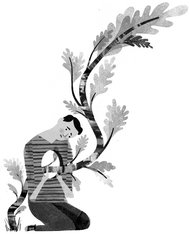 “To feel or not to feel?” is the real big question of our time. I hope you read the essay below by Ted Gup and reflect on the bigger questions this brave, grieving man has asked. I certainly felt his pain and was also blown away by how many pressing societal issues were raised in one essay by a grieving father. At World Wise Beauty I am always interested in the experience of the individual within the greater context of our culture. For better and for worse, we shape our culture, and our culture shapes us. This excellent, heartfelt essay depicts the sad reality of how a drug culture is shaped over time and how we (as a society) are complicit in perpetuating it further. Yes there is an “app” for that and a “pill for that”. But do we always really need it? Bravo to Ted Gup for asking some big questions that only we as individuals can answer…

THE news that 11 percent of school-age children now receive a diagnosis of attention deficit hyperactivity disorder — some 6.4 million — gave me a chill. My son David was one of those who received that diagnosis.

In his case, he was in the first grade. Indeed, there were psychiatrists who prescribed medication for him even before they met him. One psychiatrist said he would not even see him until he was medicated. For a year I refused to fill the prescription at the pharmacy. Finally, I relented. And so David went on Ritalin, then Adderall, and other drugs that were said to be helpful in combating the condition.

In another age, David might have been called “rambunctious.” His battery was a little too large for his body. And so he would leap over the couch, spring to reach the ceiling and show an exuberance for life that came in brilliant microbursts.

No one made him take the heroin and alcohol, and yet I cannot help but hold myself and others to account. I had unknowingly colluded with a system that devalues talking therapy and rushes to medicate, inadvertently sending a message that self-medication, too, is perfectly acceptable.

My son was no angel (though he was to us) and he was known to trade in Adderall, to create a submarket in the drug among his classmates who were themselves all too eager to get their hands on it. What he did cannot be excused, but it should be understood. What he did was to create a market that perfectly mirrored the society in which he grew up, a culture where Big Pharma itself prospers from the off-label uses of drugs, often not tested in children and not approved for the many uses to which they are put.

And so a generation of students, raised in an environment that encourages medication, are emulating the professionals by using drugs in the classroom as performance enhancers.

And we wonder why it is that they use drugs with such abandon. As all parents learn — at times to their chagrin — our children go to school not only in the classroom but also at home, and the culture they construct for themselves as teenagers and young adults is but a tiny village imitating that to which they were introduced as children.

The issue of permissive drug use and over-diagnosis goes well beyond hyperactivity. In May, the American Psychiatric Association will publish its D.S.M. 5, the Diagnostic and Statistical Manual of Mental Disorders. It is called the bible of the profession. Its latest iteration, like those before, is not merely a window on the profession but on the culture it serves, both reflecting and shaping societal norms. (For instance, until the 1970s, it categorized homosexuality as a mental illness.)

One of the new, more controversial provisions expands depression to include some forms of grief. On its face it makes sense. The grieving often display all the common indicators of depression — loss of interest in life, loss of appetite, irregular sleep patterns, low functionality, etc. But as others have observed, those same symptoms are the very hallmarks of grief itself.

Ours is an age in which the airwaves and media are one large drug emporium that claims to fix everything from sleep to sex. I fear that being human is itself fast becoming a condition. It’s as if we are trying to contain grief, and the absolute pain of a loss like mine. We have become increasingly disassociated and estranged from the patterns of life and death, uncomfortable with the messiness of our own humanity, aging and, ultimately, mortality.

Challenge and hardship have become pathologized and monetized. Instead of enhancing our coping skills, we undermine them and seek shortcuts where there are none, eroding the resilience upon which each of us, at some point in our lives, must rely. Diagnosing grief as a part of depression runs the very real risk of delegitimizing that which is most human — the bonds of our love and attachment to one another. The new entry in the D.S.M. cannot tame grief by giving it a name or a subsection, nor render it less frightening or more manageable.

The D.S.M. would do well to recognize that a broken heart is not a medical condition, and that medication is ill-suited to repair some tears. Time does not heal all wounds, closure is a fiction, and so too is the notion that God never asks of us more than we can bear. Enduring the unbearable is sometimes exactly what life asks of us.

But there is a sweetness even to the intensity of this pain I feel. It is the thing that holds me still to my son. And yes, there is a balm even in the pain. I shall let it go when it is time, without reference to the D.S.M., and without the aid of a pill.

Ted Gup is an author and fellow of the Edmond J. Safra Center for Ethics at Harvard University.