THE WATCH:
I am introducing this new WWB department to help keep you informed about major developments in wellness culture. I know how busy we all are and sometimes we miss or gloss over important news stories. ‘The Watch’ will only feature major developments in the beauty, health and wellness sectors and my mission with this department is to keep the ‘news developments that matter’ on your radar. The following article below is a major development in the nutrition and food sector for your review. Sometimes there are not perfect conclusions to studies and this is why we should always WATCH and seek out balanced and measured reports whenever an important study like this hits the media. Health studies in particular often become reduced to fast ‘sound-bites’ in the news and now more than ever it is important to watch and weigh the findings when new studies are released. Keep in mind, I am not making any conclusions for you here, and only strive to encourage ‘deeper inquiry’ before leaping to any definitive conclusions. ~Truly Herself, Lauroly 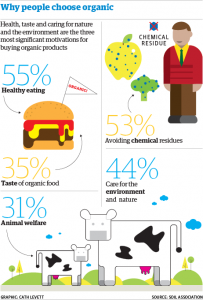 NEW STUDY & FINDINGS: There has been an ongoing argument on whether eating organic foods is healthier than eating conventionally grown foods, but now it looks as though a major study has given us some ‘proof in the puddin’ that eating organic is overall a better choice for us and the environment. But wait, hold on, don’t drink the Kool-Aid just yet! See the recent NYT article below for more details on the study. Discover how the experts weigh in and then be your own wise guru when it comes to your food purchases. I especially appreciate the quotes from Dr. Marion Nestle. Her degrees include a Ph.D. in molecular biology and an M.P.H. in public health nutrition, both from the University of California, Berkeley. For a quick takeaway, see her comments and conclusions about this major study at the end of the NYT article below. I find myself agreeing with her assessments and this is why…

Dr. Nestle has been featured here at WWB in our Healthy Epicurean department and is the author of Food Politics: How the Food Industry Influences Nutrition and Health (2002, paperback 2003) and Safe Food: The Politics of Food Safety(2003, paperback 2004), both from University of California Press. In 2003, Food Politics won awards from the Association for American Publishers (outstanding title in allied health), James Beard Foundation (literary), and World Hunger Year (Harry Chapin media). Safe Food won the Steinhardt School of Education’s Griffiths Research Award in 2004.

I highly recommend following her digital blog FOOD POLITICS  if you seek wise, grounded, and penetrating coverage of the food industry and want to learn more on how both industry and politics have a huge impact on your food and diet. See my WWB Q&A with her here to learn more about her latest bestseller ‘Why Calories Count’ from Science to Politics’. Dr. Nestle is dedicated to education and her overall body of work will help you decode the findings of studies before you implement any change in your health regimen.

Hope you appreciate the new WWB department! As I always say, be wise and do what’s best for your own bio-individuality and lifestyle. But keep in mind that ‘we’ as a collective society and culture can agree on important things-and clean food free of pesticides might be something we can all get on board with! 😉

Adding fuel to the debates over the merits of organic food, a comprehensive review of earlier studies found substantially higher levels of antioxidants and lower levels of pesticides in organic fruits, vegetables and grains compared with conventionally grown produce.

“It shows very clearly how you grow your food has an impact,” said Carlo Leifert, a professor of ecological agriculture at Newcastle University in England, who led the research. “If you buy organic fruits and vegetables, you can be sure you have, on average, a higher amount of antioxidants at the same calorie level.”

However, the full findings, to be published next week in the British Journal of Nutrition, stop short of claiming that eating organic produce will lead to better health.

“We are not making health claims based on this study, because we can’t,” Dr. Leifert said. The study, he said, is insufficient “to say organic food is definitely healthier for you, and it doesn’t tell you anything about how much of a health impact switching to organic food could have.” 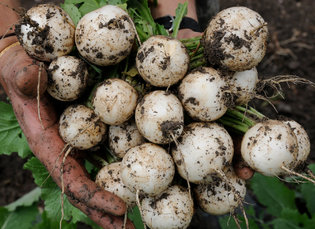 Still, the authors note that other studies have suggested some of the antioxidants have been linked to a lower risk of cancer and other diseases.

The conclusions in the new report run counter to those of a similar analysis published two years ago by Stanford scientists, who found few differences in the nutritional content of organic and conventionally grown foods. Those scientists said the small differences that did exist were unlikely to influence the health of the people who chose to buy organic foods, which are usually more expensive.

The Stanford study, like the new study, did find pesticide residues were several times higher on conventionally grown fruits and vegetables, but played down the significance, because even the higher levels were largely below safety limits.

Organic farming, by and large, eliminates the use of conventional chemical fertilizers and pesticides. Those practices offer ecological benefits like healthier soils but produce less bountiful harvests. The Organic Trade Association, an industry organization, estimated organic food sales last year in the United States at $32.3 billion, or just over 4 percent of the total market.

What is disputed, vociferously, is whether organic fruits and vegetables provide a nutritional lift. Many naysayers regard organic as a marketing ploy to charge higher prices.

“The other argument would be, if you just eat a little bit more fruits and vegetables, you’re going to get more nutrients,” said Alan D. Dangour, a researcher at the London School of Hygiene and Tropical Medicine. Dr. Dangour led a review published in 2009 that found no significant nutritional differences between conventional and organic foods.

Such differences are difficult to discern, because other factors that can vary widely from place to place and year to year, like the weather, also influence the nutrients. Even if differences exist, it is unclear whether they would affect consumer health.

In the new study, an international team of scientists did not conduct any laboratory or field work of their own. Instead, they compiled a database from 343 previously published studies and performed a statistical procedure known as a meta-analysis, which attempts to ferret robust bits of information from studies of varying designs and quality.

Some of the studies reported many measurements, some only a few. Some included several crops grown over multiple years, while others looked at only a few samples. But if done properly, the results of a meta-analysis can be greater than the average of its parts.

Over all, organic crops contained 17 percent more antioxidants than conventionally grown crops, the new study found. For some classes of antioxidants, the difference was larger. A group of compounds known as flavanones, for example, were 69 percent higher in the organic produce. (At very high quantities, as in some supplements, some antioxidants have been shown to be harmful, but the levels in organic produce were not nearly that high.)

The researchers said they analyzed the data in several different ways, and each time the general results remained robust.

The study cost $429,000, which came from the European Union and the Sheepdrove Trust, a British charity that supports organic farming research. The scientists said the money came with no strings, and their research passed the rigor of scientific peer review for publication.

Charles M. Benbrook, a professor at Washington State University and another author of the paper, said this analysis improved on earlier reviews, in part because it incorporated recent new studies.

The findings fit with the expectation that without pesticides, plants would produce more antioxidants, many of which serve as defenses against pests and disease.

The study also found that organically produced foods, particularly grains, contain lower levels of cadmium, a toxic metal that sometimes contaminates conventional fertilizers. Dr. Benbrook said the researchers were surprised by that finding; there was no difference in other toxic metals like mercury and lead.

Even with the differences and the indications that some antioxidants are beneficial, nutrition experts said the “So what?” question had yet to be answered.

“After that, everything is speculative,” said Marion Nestle, a professor of nutrition, food studies and public health at New York University. “It’s a really hard question to answer.”

Dr. Nestle said she buys organic foods, because she believes they are better for the environment and wants to avoid pesticides. “If they are also more nutritious, that’s a bonus,” she said. “How significant a bonus? Hard to say.”

She continued: “There is no reason to think that organic foods would be less nutritious than conventional industrial crops. Some studies in the past have found them to have more of some nutrients. Other studies have not. This one looked at more studies and has better statistics.”

Dr. Dangour, however, remained entirely unconvinced. He said the researchers erred in not excluding the weaker studies from the analysis. “To my mind, there’s no convincing evidence that these foods are different in nutritional composition,” he said.