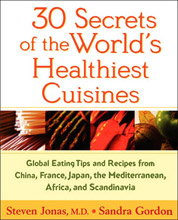 This substantive book is on my top ten list of health and nutrition books. The author Sandra Gordon is one of the most sought-after and highly respected food, nutrition, health and fitness writers in the industry and she teamed up with a distinguished doctor/professor, Dr. Steven Jonas, specializing in the field of public health and preventive medicine to write it.  Be impressed…

Sandra has written literally hundreds of articles on diet, weight loss, health, general nutrition and fitness and has become one of the leading consumer journalists on the relationship between food and various diseases including cancer, osteoporosis and heart disease. Her articles have been featured in leading consumer magazines such as Prevention, More, Self,  Redbook,  Shape, and now she has graciously agreed to come chat with World Wise Beauty the fresh and new digital destination for celebrating ideals for wellness culture.

So, have a cup of tea and do a little arm-chair traveling with me as I chat with Sandra about the 30 Secrets of the World’s Healthiest Cuisines and pick up a few healthy global eating tips.

Lauroly Opening – Welcome to World Wise Beauty Sandra. I am excited about featuring your book “30 Secrets of the World’s Healthiest Cuisines” co-authored with Dr. Steven Jonas, Professor of Preventative Medicine at Stony Brook University in New York. The book may be couple of years old but it’s an excellent health and nutrition book blending ground breaking nutritional research with information about the culinary histories and traditions of a number of major countries and regions around the world. The book is filled with culinary wisdom and could help people reduce their chances of developing a number of major diet-related diseases such as cancer, heart disease, diabetes, and osteoporosis. There have been many books covering the subject of diet and longevity since your book was published but I still find your book to be one of the best  to connect nutrition with health and longevity.  Plus it also includes fabulous globally inspired recipes! My personal favorite is Seafood Soup with Rouille from France. Let’s get started with learning how you and Dr. Jonas got together to write this book. 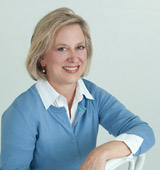 Sandra Gordon: “30 Secrets” was an idea I came up with after writing a piece for Woman’s Day, called “The World’s Best Eating Tips.” I loved the idea of going around the world in a book, reporting on the healthiest eating habits, take-home tips that Americans could easily import into their repertoire. I wrote a book proposal—my first—and then got a literary agent (Linda Konner in New York City). It was Linda who connected me with Dr. Jonas, who is a professor of public health. Dr. Jonas did a great job of reading what I wrote and putting his mark of approval on it. When John Wiley expressed interest in “30 Secrets,” which was my first book deal, I was working fulltime in NYC as a health writer in the marketing department for a health insurance company. I also happened to be pregnant with my first child. My husband and I had just bought our first house too. I quit my job to write the book, in my new house in the suburbs. It was a race against time. Would I get the book done before the baby came? That’s all I focused on, so much so that I didn’t go shopping for new-baby gear until about a week before my due date. As it turns out, my daughter was two weeks late and the doctor wasn’t waiting any longer. I think I had willed my baby to stay in, and she took my cues too seriously. I ended up having plenty of time to complete the book. With baby #2, I wrote book #2 when I was pregnant too, “The Aging Eye,” for Harvard Medical School. I began to see a pattern. If I want to get another book deal, do I have to get pregnant again? All told, that was my last baby, but not my last book, fortunately.

Lauroly Q-  A busy woman you were–birthing babies and books! Your book “30 Secrets” was timely in the year 2000 because it was right about that time period we Americans started to get hooked on “magic bullet” foods and ingredients. Mediterranean diets in particular became a global fascination as more scientific research piled up about the culture’s longevity and low rates of heart disease compared to the rest of the world. You and Dr. Jonas synthesized cultural research and nutritional science in an easy to read book about the “world’s healthiest cuisines”. What did you personally come away learning after writing this book with Dr. Jonas?

Sandra Gordon: Since writing the book, my eating habits have really gone global. I cook a lot, which is not very American, and I’m a big recipe person. I love to go Mediterranean one night, Japanese the next. We recently had two teens stay with us from Russia for three weeks, which required cooking big dinners nightly. Interestingly, the girls expected home cooking because few people can afford to go out to eat in Russia. During their stay, I realized how much my meals are a mishmash of cultures. Aside from peanut butter, which I made the Russians try (they had to hold their nose and chase the peanut butter bites they took with water); none of my meals were “American,” whatever that means. Finally, on the last day, the Russians requested an “American lunch.” Knowing they were going to be flying home for 11 hours, we went to Five Guys for burgers and fries, so they could fuel up for their flight. Incidentally, they thought Five Guys was much better than McDonald’s, which they had gone to during their free time.

Lauroly Q-In some ways it’s sad that the American cultural experience is to eat at a fast food chain but you are right we really are a blending of cultures, so what truly is American? Dr. Jonas  is careful not to glorify “super foods” but encourages us to incorporate a variety of them into a well- rounded diet. Very wise advice but when you learn more about diets around the world you  come to appreciate how various cultures survived over time because of nature’s bounty and compensation. Can you illustrate a few cultural examples of this? 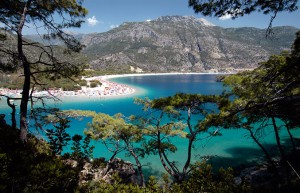 Sandra Gordon: It seems like every culture has gone through periods of famine because of war or other reasons, which made them resourceful food wise. That’s why they eat all parts of the animal in France, for example. In the past, food was scarce and the culinary compensation that resulted became part of their food tradition. The Mediterranean regions known for their health and longevity, such as Crete, were based on subsistence farming. Traditional Cretans were poor, but their gardens yielded tomatoes, greens like purslane, parsley, garlic, olives/olive oil and fish from the adjacent sea. I think the traditional Mediterranean diet is one of the healthiest out there, and studies continue to prove it. Fortunately, it’s an eating pattern that’s pretty easily to import. My idea of super foods is based in the Mediterranean: yogurt, olive oil, all fruits and vegetables, including onions and garlic, fish and a little wine too (white or red). At my house, we also eat grains like bulgur because my husband in Armenian and that’s his comfort food.

Lauroly Q-It is interesting to note that the world’s healthiest cuisines are often corrupted once they have been imported to America. Chinese food is a good example. Can you share more about “westernization” and the unhealthy effects on some global cuisines? 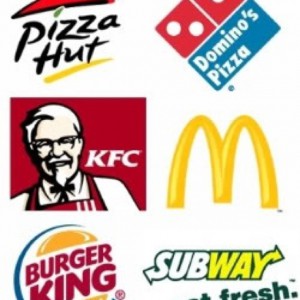 Sandra Gordon: It’s true–what we consider to be Chinese food—egg rolls, sweet and sour pork, chow mein, chop suey, barbecued spare ribs, for example–aren’t part of the traditional Chinese diet. They were invented for Americans by the Chinese who emigrated here. Traditional Chinese food is a stir fry, with very little meat and lots of inexpensive rice. I think it’s fine to eat American Chinese food every once in a while, as long as you know that’s what you’re eating, and not try to tell yourself, “It’s Chinese, so it’s healthy.” On a similar note, the westernization of cuisines is a widespread problem, especially in cities across the globe. As people have less time and more money, they turn to quick fixes like fast food, which are becoming more increasingly available. Then again, I’m surprised by how much some global traditions are holding fast and how the American diet isn’t infiltrating everything. The concept of home cooking in Russia, for example, is what the 1970s were in the U.S. When you cook at home, you can eat healthier because you’re in control. Yet, Russia is a whole-milk kind of culture. Non-fat milk is not the norm. So the diet isn’t as healthy as it could be in terms of saturated fat and they have high rates of heart disease to prove it.

Lauroly Q- I found the information on West Africa in your book to be eye-opening. It puts the importance of a plant-based diet at the forefront of nutritional health and science and we are just beginning to embrace this ideology now in 2013. The smallest country of Africa is Gambia and they have the lowest incidence of cancer in the world–even lower than Japan and especially when it comes to breast cancer. What is their secret and what should we be learning from this knowledge today? 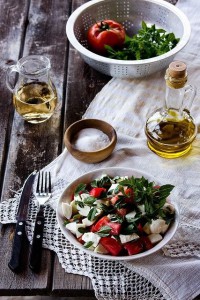 Sandra Gordon: Since writing “30 Secrets,” we’ve learned even more about a plant-based diet–that it’s even more important for heart disease protection than cancer protection. One of the things we’ve also learned is that staying slim throughout your life can reduce the risk of cancer. After writing “30 Secrets,” I had a friend who worked for a relief organization in The Gambia, which gave me a different perspective on the cancer prevention aspects of the diet. When she came home after a year, her parents didn’t recognize her at the airport because she was so skinny. She said that it was so hot there that she just didn’t feel like eating much, and really, there wasn’t that much to eat, in terms of variety. Peanuts, yams; yams, peanuts. According to a major report by the American Institute for Cancer Research, staying lean throughout your life, with a body mass index (BMI) in the range of 21 to 23, is one of the most important things you can do to stay cancer-free. And that’s because any weight gain after age 18 (excluding pregnancy) is mostly fat. Excess body fat produces hormones and releases inflammatory factors into the blood stream that can influence cell growth, upping the risk of cancer of the esophagus, colon, rectum, endometrium, gallbladder, liver, pancreas, and kidneys.

Weight gain after menopause is particularly lethal. It increases the risk of breast cancer by 8 to 13 percent with every 11 pound tacked onto your frame. Some of the risk associated with weight gain sticks around even if you purge the pounds. But if you’ve gained and lost even just 10 pounds of it, you’re better off than if the weight never left. So maybe it’s the fact that The Gambians don’t have an obesity epidemic that’s saving them from cancer. In any event, no matter what and how you eat, try to do what you can to keep your weight in check. And go global—the Mediterranean diet, especially, is a model for filling up on fewer, though quality, calories.

Lauroly Closing: Thanks so much for joining me Sandra. I hope we have inspired a number of readers to discover your book “30 Secrets of the World’s Healthiest Cuisines” and learn about the benefits of embracing a rich, and varied healthy global diet. We look forward to more work from you as you often write and report on health and wellness in various magazines and publications. Hope you come visit us again!